Need an Attorney that Specializes in Drug Cases?

Over the past 18 years, The Law Offices of Seppi Esfandi has assembled a knowledgeable team of criminal defense paralegals, investigators, experts, and attorneys all dedicated to providing high quality advocacy and a focus on personalized representation in cases involving controlled substances. We will comb through the evidence in your case to craft a strong defense theory designed to poke holes in the district attorneys case. We will conduct an independent investigation and craft a creative defense strategy to further your goals. We are equipped with expertise in the courtroom, knowledge of the inner working of government agencies like the DEA and FBI, state-of-the-art investigative resources, and media savvy to help combat damage to your reputation. 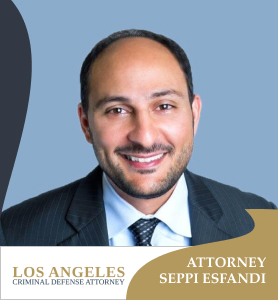 The consequences of drug charges are very overwhelming. Criminal charges would lead to deprivation of liberty, payment of hefty fines, and a life that is entirely changed upside down. What used to be your rights are now taken away from you. A drug offense is not something that one should take lightly. A person who commits a drug crime is considered a nuisance that negatively affects society.

If there is no truth about your drug crime charges and you fear for your life, do not hesitate to contact a drug crimes lawyer in Los Angeles. Los Angeles Criminal Defense is a criminal defense law firm experienced in defending those wrongfully charged with drug crimes. Our extensive experience in handling drug cases allowed us to safeguard the constitutional rights of innocent individuals.

Why Should You Hire a Los Angeles Drug Crime Lawyer When Facing Drug Crime Charges?

Dealing with drug charges is unusual and overwhelming for an innocent person. Drug offenses are grave and seen by the law as a nuisance to society that causes harm to its citizens. Illegal drugs have caused the future of children to turn into chaos.

A drug crime conviction will alter your life completely if you can’t defend yourself in court. To deal with law enforcement is important, but to prove your innocence before the courts of justice dictates what your future will be.

A Los Angeles drug crimes attorney can help you address these concerns. Having your drug case dismissed is our primary aim to make sure that you preserve your rights and live the way you’re supposed to, drug-free and centered on the pursuit of your happiness.

What You Need to Know About California’s Drug Laws

California’s drug laws provide for specific offenses and corresponding penalties for drug-related crimes. Drug possession can be characterized as simple possession or actual possession, and having drug paraphernalia under your custody can be an offense that leads to imprisonment and hefty fines. Understanding the specific drug offenses and their differences is important to determine the possible penalties, such as the terms of imprisonment and the number of fines to be imposed.

There are several types of illegal drugs that are prohibited by California’s drug laws. The list includes, but is not limited to, marijuana, cocaine, heroin, meth, and ecstasy, among many others. These illegal drugs differ in their effects and how they are used.

Penalties for possession, use, or sale of marijuana can be lighter than that of cocaine, heroin, and other more harmful drugs. To know more about drug laws’ specific provisions and better protect yourself from false drug charges, call us at Los Angeles Criminal Defense.

What You Need to Know About California’s Drug Laws

California’s drug laws provide for specific offenses and corresponding penalties for drug-related crimes. Drug possession can be characterized as simple possession or actual possession, and having drug paraphernalia under your custody can be an offense that leads to imprisonment and hefty fines. Understanding the specific drug offenses and their differences is important to determine the possible penalties, such as the terms of imprisonment and the number of fines to be imposed.

There are several types of illegal drugs that are prohibited by California’s drug laws. The list includes, but is not limited to, marijuana, cocaine, heroin, meth, and ecstasy, among many others. These illegal drugs differ in their effects and how they are used.

Penalties for possession, use, or sale of marijuana can be lighter than that of cocaine, heroin, and other more harmful drugs. To know more about drug laws’ specific provisions and better protect yourself from false drug charges, call us at Los Angeles Criminal Defense. 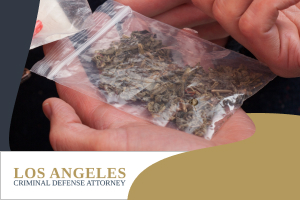 If the person is a minor or under eighteen (18) years of age, such possession of marijuana below 28.5 oz is considered an infraction. The penalty shall be drug education or counseling and community service of up to 60 days.

If the person is over 18 years but not more than 21 years of age, possession of marijuana below 28.5oz is still an infraction but is punishable by a fine of not more than $100.

A person under 18 years of age and is guilty of possession of marijuana above 28.5oz shall be required to complete 8 hours of drug education or counseling and community service of at least 40 days and up to 90 days.

A person over 18 years of age shall be punished with imprisonment in a county jail for up to 6 months or a fine of not more than $500. 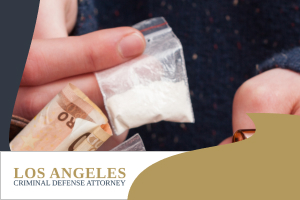 Cocaine is a schedule II narcotic, and you can be charged with possession of cocaine for simply having the drug on your person, in your car, or at your home. Cocaine is a widely used drug that affects the brain and central nervous system, and it produces an intense rush of pleasure that may be described as a “high.”

Cocaine is self-administered by many people who become psychologically dependent on the drug and develop a tolerance. Psychological dependence upon cocaine has profound behavioral effects, such as erratic and violent behavior resulting from frequent drug-taking.

Felony: 11370.1 HS – Cocaine Possession with a Loaded And Operable Firearm

The Health and Safety Code 11370.1 provides the punishment of cocaine possession with a loaded and operable firearm. The penalty for such an offense is imprisonment in the state prison for up to four years. 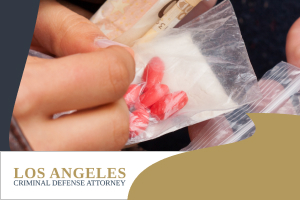 Heroin is a manufactured opioid drug that is illegal in California. No matter what form it is in, the substance itself is considered a controlled substance under California law. It’s important to note that even if an individual does not have heroin on their person but has paraphernalia used for using it, they may still be charged with possession of heroin.

Possession of heroin is punished with imprisonment in a county jail for not more than one year. 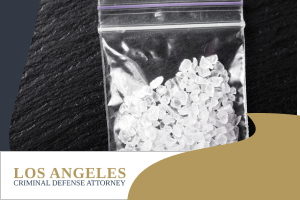 Meth is short for methamphetamine. Meth is a drug that alters the brain and nervous system by increasing dopamine, a neurotransmitter. It is usually ingested orally, snorted, smoked, or injected. Like heroin, even if it’s not on your person but has paraphernalia associated with it (like needles), you may be charged with possession of meth. 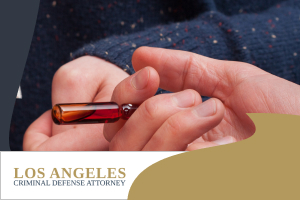 The Drug Diversion Program or the “pretrial diversion” of California aims to treat and rehabilitate those charged with possession and use of illegal drugs. The primary goal is to cure them of their drug addiction and admit them to a rehabilitation facility instead of prison.

In addition to this, Penal Code 1000 sets forth the following conditions for an accused to qualify for the drug diversion program:

Upon serving a sentence under the drug diversion program, the criminal charges shall be dismissed. 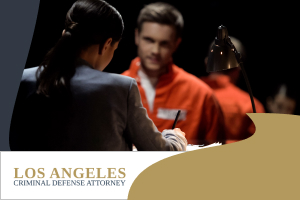 Law enforcement must uphold the constitutional rights of all citizens, even those charged with crimes. Every citizen has the right to unlawful search and seizure, which is also related to their right to privacy. The police cannot just arbitrarily force individuals to be searched upon without any just cause.

To protect the integrity of evidence, law enforcement must ensure that the pieces of evidence are placed under the custody of the authorized investigators. There should be no doubt about the integrity and quality of the evidence to be presented by the prosecution. The police should strictly follow the chain of custody rule to ensure that the evidence found in the crime scene is the same evidence to be presented in court.

In drug possession charges involving a prescription drug, the strongest defense is the existence of a valid prescription duly signed by a licensed and authorized physician. This evidence eliminates doubt as to why an individual has a prescription drug. The use of the said drug is for valid and justifiable reasons such as medication, in possession of medical marijuana.

The success of your drug charges may also depend on the quality of legal services rendered by your Los Angeles drug defense lawyer. Our Los Angeles drug lawyer, Attorney Seppi Esfandi, has over 18 years of experience in dealing with criminal cases.

Our track record speaks for itself, and we want this to provide confidence in our clients that we are serious in what we do. We provide aggressive and effective legal strategies for our clients, and we continuously improve to gain better results for those who deserve justice. 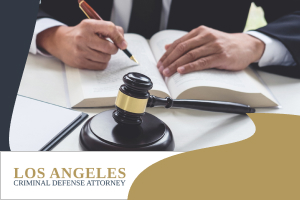 A Los Angeles drug crime defense attorney can help you create an effective legal strategy to prove your innocence and effectively allege your defenses. Our Los Angeles drug crimes lawyer is always here to answer your queries and give you the information you need. Call us now at 888-885-8844 for a free consultation.

Give Us a Call:

Seppi helped me out of a bind when I really needed it. No one else seemed to want to help me as much as him. It doesn’t get any better. I highly recommend.

Seppi was awesome.  He will answer his phone at 10pm on a Saturday or any other time you need him. I’ve never had to call back. A few other firms I talked to wanted me to call back several times before they could even give me a quote or advice. He took the time to really listen to me and was able to meet right away. The decision to hire him was obvious. I’ve never been in legal trouble before and he made me feel very comfortable and assured throughout the entire situation.

I had a situation where I was facing some serious time. The charges would have ruined my life. Seppi came through for me and now it’s not a problem. Very grateful.

Seppi is amazing! He got my case dismissed in one week! He and his office always communicated with me and took the time to talk with me about the process. I will always recommend Seppi!

Our Team is Ready to Answer Any Questions You Have

It is our belief that a well-informed client is a happy client. And although at times cases may continue longer than anticipated, you can rest assured that you’ll be up-to-date on the most recent news and developments. Our Director of Client Relations is only a phone call, text or email away, 24 hours a day, 7 days a week to address any questions or concerns. This crucial line of communication is what separates our law firm from the average lawyer who many times is too busy to answer your calls. 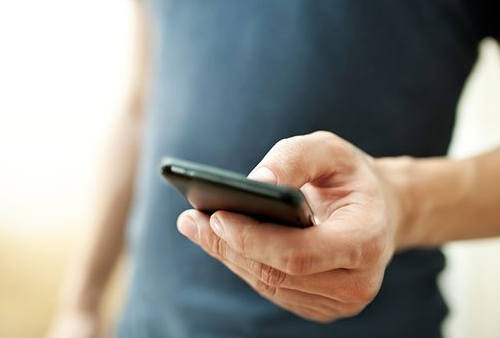